Race Night at The Chase

We held our first ever Race Night at The Chase and what a fantastic night!!!

Cinema Night
The children all had a great time at our cinema night, Rio 2 and The Lego Movie proved to be winning films!!
End of Summer Term Barn Party & CampCallendar Farm,

What a fantastic day was had by all!!!! Thank you everyone for coming and making it such a amazing success

Barn Dance and Camp - Saturday 13th July 2013
Callendar Farm Nuneaton hosted a Family Barn Dance and a pitch for those who wanted to camp the night.

Back by popular demand and booked early to make sure we got our slot! T

What a fantastic turnout despite the threat of even more snow!!!! With over 20 teams entering and a total of £614.50 raised.

Leavers Service
At the last year 6 had their leavers' service - 67 Bibles were given out from the SNSA.
Summer Sensation - 26th May 2012

The quiz night number 8 was a huge success - the first and we don't think the last to be held at Ambleside club.  A great success with around 130 people and £655.26 raised, including raffle and sponsorship for St Nicolas Primary school children.

THANKS TO ALL INVOLVED!

10 Apple iPads have been ordered for the school from funds raised through SNSA events.

This takes the total iPads in school to 16, which is enough for a whole class to use when sharing between two children.  This is a fantastic state of the art resource and all children are thrilled to be able to have access to the iPads.

The Committee has also agreed to buy more staging and in the New Year will be buying sports kits, a video camera and will make a contribution towards the Eco Club.

These SNSA donations are all thanks to the support and effort put in by each and everyone involved in the events we organise. 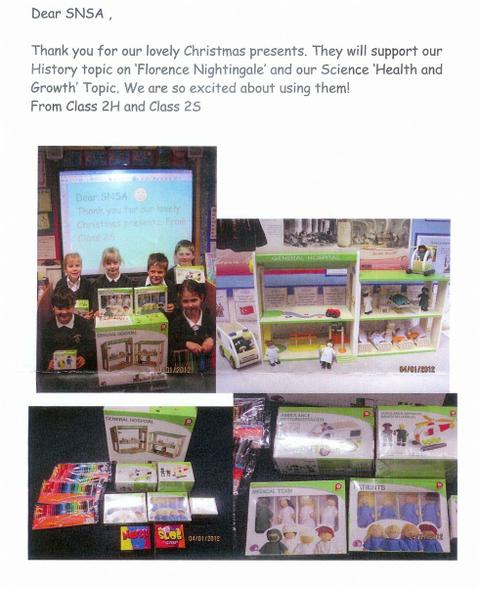 The 2011 Christmas Fair proved a great success, raising a fantastic £1,903 for the SNSA funds.  The evening was really well attended and of course Father Christmas was in attendance!  Thank you to all the school staff and parent helpers that contribute to the success of the fair and to everyone who supported the event.

We are sure you will agree, that this is a tremendous result, borne out of sheer commitment and dedication to the school.  Many many thanks to all committee members, staff members, parents and friends for their continued support of all the successful events we have run this year.  We hope we can count on your help and support in the coming new school year!

The school disco was another fund-raising success with £266.28 being raised!  Thank you to all helpers on the night.  Everyone seemed to enjoy themselves, and this firm favourite fund-raiser will return in the new school year.

Our main fundraising event of the year, the Summer Sensation, was held on Saturday, 21st May 2011 from 2pm until 5pm.  For the first time ever, this year Mr Fisher from Callendar Farm very kindly did a sheep sheering demonstration!  Judging by the crowds this was a very popular addition to the Summer Sensation, and we don't imagine there are many school Summer Fairs that can boast of having sheep shearing demonstrations!  Mr Edwards had a go and there is a lot of photographic and video evidence to prove it!  Our thanks goes to Mr Fisher for suggesting and organising this attraction.  Great idea!

The event itself ran very smoothly and the weather was kind - although there was a blustery wind it did not deter people from attending.  There were fair rides, bouncy castles and slides, ice-cream van and the usual traditional stalls of grocery tombola, win a jar, win a teddy, face painting, white elephant, children's raffle, book stall, toy stall and many many more.

Many many thanks to ALL the people involved in helping to run this event.  The lead up to it and the running of it involves a great deal of work from the Committee members, family and friends.  Without this help and support the event would not have been such a great success.  Many thanks.

We feel a special thanks should also go to Nicky Grove, Treasurer of the SNSA, who having spent the majority of the day at the Summer Sensation, helping to set up, running a stall during the event and afterwards clearing away, then went home and counted all the takings and prepared for banking. Everyone is keen to know the result of the day, and Nicky doesn't rest until she has counted and reported back.  So well done Nicky!

Here's to making next year's event even more successful - what other unusual attraction could we add?  Suggestions on a postcard please!

It was the first time the SNSA had run the Ladies' Fashion Show - it was held at Ambleside Club and was run by SD Fashions - a Nottingham based company.  We sold entrance tickets for £5 and held a raffle on the night.  The total raised through ticket sales and raffle was £654.02 - we are hoping to get match funding from Barclays which would bring the total raised from the event to in excess of £1200. The feedback we have received has been very positive and we are planning to run this event again in April 2012 - in fact SD Fashions have already been booked!  Further details will follow nearer the time.

The popular Quiz Night was run on Friday, 11th March 2011.  Thanks go to Miss Davies and Mrs Hawkins who were the Quizmasters with help from Mr Edwards.  Fun was had by all, and the evening raised £250.50 including raffle.

As usual the Christmas Fair was another big success, with a lot of help and support from Committee and Parents.  A total o £1,687 was raised and will be passed on to the school to buy all sorts of equipment in the coming months.

Each child was invited to design a Christmas Card and then they were printed in packs of 12 for parents to purchase and send out at Christmas.  This proved a very popular event with 261 children taking part, raising a total of £402 in funds for the school.  Thank you everyone for your support in the administration of the scheme.

The Summer Sensation raised an amazing £2,781 - a truly outstanding result!

This was the first year we have held the Summer Sensation so early in the year.  The weather could not have been better and the support from Staff, Parents, Family and Friends was tremendous.  There were Fair Rides, Bouncy Castle, Ice-cream stall, Books, Toys, Grocery Tombola, Beat the Goalie, Children's Raffle,  to name but a few.  The day was a huge success.  Many thanks to all who helped before and during the day, and many thanks to those who turned up on the day and spent their money!  Another successful event!

The Christmas Fair was a huge success, raising £1,627.48, an increase on last year.  The SNSA would like to pass on our thanks to all staff, parents and helpers involved in the evening - without this help we would not achieve the results we did, and our children would not benefit.  So THANK YOU!

This was the first year the SNSA had tried this Arts Council initiative.  It took a fair bit of organisation from the SNSA committee members and teachers (special mention has to be given to Nicky Grove who put in hours balancing and reconciling monies and orders), and should we decide to run the same project next year then there are areas which can be improved upon!  All the hard work was worth it, as we are pleased to announce that a total of £446 has been raised for school funds.  Cards were delivered in November, and all feedback has been positive.  We are sure to run this project again next year.

Projected funds to be raised from the Webb Ivory catalogue sales this year is £201 to school funds.

The Quiz Night proved to be another popular and successful night with Mr Edwards and Miss Greenway the Question Masters.  Total raised for the evening was £218.  Watch this space for some photos - they will follow shortly ...

There was much to do and many stalls, including a Bouncy Castle, Hot Dogs and Burgers, Cake stall, Grocery Tombola, Ducking Stool (thanks to Mr Bryne and Mr Edwards!!!), Toy Stall, Win a Jar, Beat the Goalie, Win a Teddy, Books, DVD and Video Stall, to name but a few!

The weather was kind, with only a few spots of rain.  The event involves a great deal of hard work in preparation and on the day.  The SNSA is grateful to all staff, parents, family and friends who helped before, during and after the event.

We are sure you will all agree that the work is well worth it and St Nicolas Children will all benefit from our efforts.  Thank you to all!

This Children's Disco is always a well supported and attended event. Fun was had by all and a total of £361.37 was raised on the night - a GREAT result - THANKS go to everyone involved in making this a success.

On Saturday, 14th March 2009, the SNSA organised our first ever Car Boot Sale.  The weather was very kind, being dry but with a cool wind.  We were glad there was no rain!

There was a good turn out with 23 people selling their goods from the back of the cars, including clocks,dvds, videos, clothes, and childrens toys to name but a few.

The event raised a very successful £181.32 after expenses!

There seemed to be a good flow of people visiting the car boot sale and from what we could tell they were carrying out plenty of goods which they had bought!

We would like to thank everyone for their support of this event.  After speaking to 'booters' we believe that most people would be interested in a future car boot sale, so watch this space!